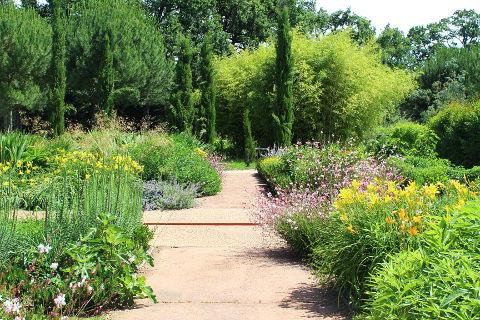 The famous French writer, Colette, used to holiday at the Chateau de Castel Novel in Varetz in the Correze department of France.  Near to the chateau the 'Jardins de Colette' have been created in her memory and highlighting different phases of her life through plants and landscapes.

The gardens cover more than 5 hectares and is split into distinct sections celebrating different aspects of Colette's life. Each section has a picture of Colette and a description of the significane of the highlighted region to Colette's life.

At the entrance to the gardens is a shop and a salon de thé offering refreshments for before or after your visit. The garden stretches out from here along a path bordered by a pretty selection of trees and bushes. 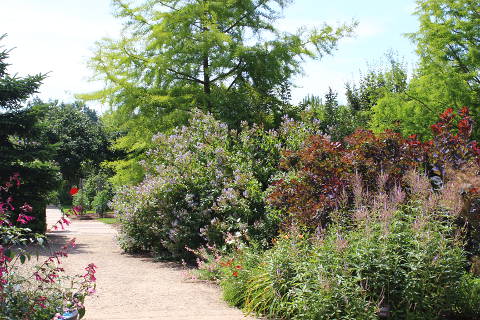 The first garden is the Burgundy garden as Colette was born in Saint Sauveur en Puisaye in Burgundy in 1873. The garden includes plants from the region and a potager evoking the vegetable garden in her childhood home.

The second garden is an area given over to trees representing the beech, poplars and cypres trees found in the large park that was part of her home in 'le domaine des Monts Boucons' in the Franche-Comté region. It was in this region that Colette wrote "Dialogues de betes" the first novel she published 'almost' in her own name rather than her husband's name Willy. In fact she signed as Colette Willy and kept this name for several years before signing simply as "Colette".

Garden 3 takes us to Brittanz where Colette lived from 1910 to 1927 in Rozven near to Saint-Malo. In this garden blocks of granite represent the cliffs and the planting is dominated by eryingiums and verbena bonisaris both common to the seaside landscape of the area. 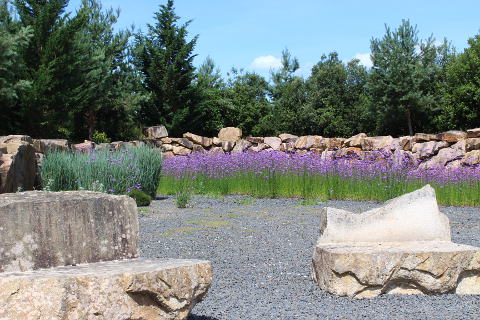 Chardons are also in the garden to evoke not only the plants of Brittany but also one of Colette's best known books "Le Blé en herbe" in which Phil, a teenager, gives a bouquet of blue chardons to Mme Dalleray - an older woman!

Whilst in Brittany Colette started writing for the paper "Matin" and met the editor Henry de Jouvenel. A relationship ensued which led Colette to the next chapter in her life in the Corrèze.

Garden 4 represents the Correze region and the chateau de Castle Novel - the chateau next to these gardens. This garden has lots of different varieties of willows as these were very common in the are in the late 19th and early 20th century and were used for basket weaving. There is also a chicken coop as Colette's daughter took great pleasure in feeding the hens whilst in the Corrèze.

Following her divorce in 1925 Colette met Maurice Goudeket and with her discovered Provence. This is the theme of the 4th garden and our personal favourite. A long rill provides freshness and either side of this are borders packed with favourites such as rudbekias, echinaceas, day-lillies, crocosmia and gauras. These evoke the "parallel flower borders evoked in "Prisons et Paradis". 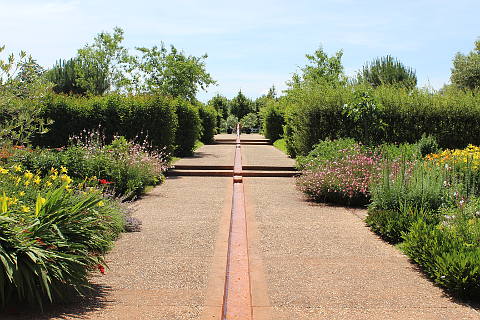 Colette loved the Provence region (who doesn't!) and bought a small house called "La Treille Muscate" near to Saint-Tropez. Here she lived a simple life with her last husband Mauice Goudeket. Evoking this seaside home olive trees, bamboos, lavenders and cypres trees all appear in the Provence garden.

Colette was a big fan of roses and at the end of the Provence garden is a delightful rose garden.

The 6th and final gardin is the Palais Royal garden evoking her final house on the rue de Beaujolais near to the Palais Royal in Paris. Colette lived here for 16 years and died here at the age of 81. 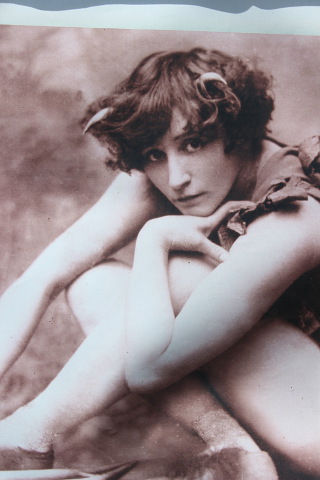 Les Jardins de l'Imaginaire at Terrasson is a magnificent contemporary garden well worth a visit.

The Jardin de Lostanges at Lostanges near to Beaulieu has plants from around the world.

Map of Les Jardins de Colette and places to visit 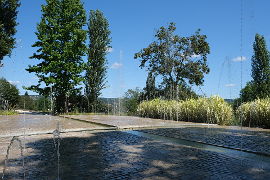 Les Jardins de l'Imaginaire is a contemporary garden which sits above and has great views of the town of Terrasson. 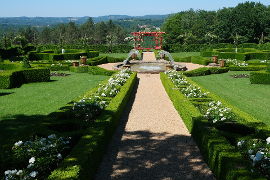 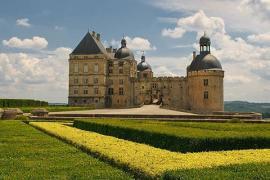 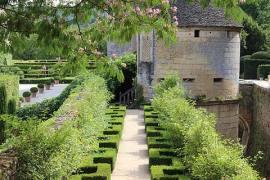 The beautiful Chateau de Losse is surrounded by very simple and stylish garden with lots of clipped box and lavender balls. 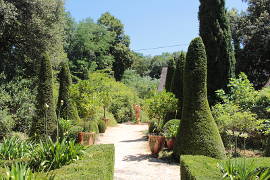 Les Jardins de Cadiot is a large garden with lots of different styles and large collections of peonies and day lilies and more. 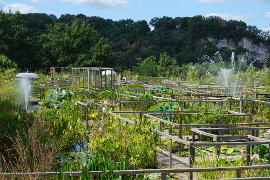 The Jardins d'Eau de Carsac is a water garden full of water lilies and lotus flowers.