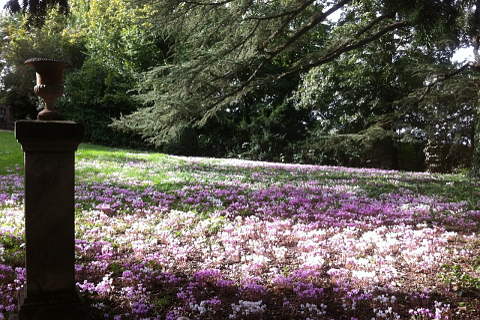 The Jardins de la Croze are situated at Billom in the Puy de Dome department.

The garden was voted the favourite garden in the Auvergne region by the French tv channel France 2.

The gardens surround a beautiful manor house, some parts of which date to the Middle Ages. The gardens were begun in the 19th century and then redesigned in 1919. The gardens of today remain true to this design and are a traditional french formal style garden.

The formal gardens feature a round pond with a fountain surrounded by large box balls and shaped hedging.

Further away from the house is a large English style park with large ancient trees and even a 'folly'. One of the trees is a three-hundred year old oak tree and is a listed 'remarkable tree'.

There is also a large potager organised in six squares and looking onto a fountain. The central alley is edged with espaliered pear and apple trees and four of the squares are edged with soft-fruit bushes, the last two are edged with a collection of dahlias.

Two rose gardens complete the ensemble and contain over a hundred varieties of ancient roses.

One of the highlights of the garden is the mass of cyclaments that flower in the gardens.

The Jardins de la Croze are open for the Rendez-Vous-Aux-Jardins in spring and the Jours de Patrimoine in October. They are also open by rendez-vous during May to October.

Gardens to Visit Nearby

Also in the Puy de Dome department is the park and garden of the Chateau d'Hauterive in Issoire. This garden is classified as a 'jardin remarquable'. 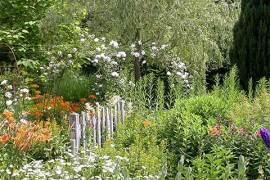 The Jardin de la Ganille has a lovely display of azaleas, rhododendrons and heathers. 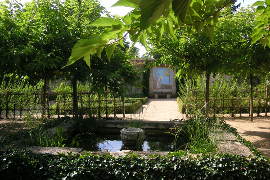 The Gardens of the Chateau d'Ainay le Vieuil include a large rose garden and four walled gardens.