Winner of third place for the  "Best Park in France 2005 prize" and  winner of 'Garden of the Year 2009' with the Association of Garden and Horticultural Journalists. It is certainly one of my favourite gardens in France and one of my top gardens anywhere. It really is superb, make sure you don't miss it. The Jardins de Castillon is a listed "Jardin Remarquable" (remarkable garden).

The Jardins de Castillon is situated in Castillon near to Bayeaux in Lower Normandy.

Les Jardins de Castillon were largely designed by Colette and Hubert Sainte-Beuve. The gardens, which cover about one hectare were first opened in 1985. The garden is really a series of gardens linked by long alleys.

The garden is laid out on three terraces with a small arboretum and a labyrinth created from box hedging at the end of the visit. 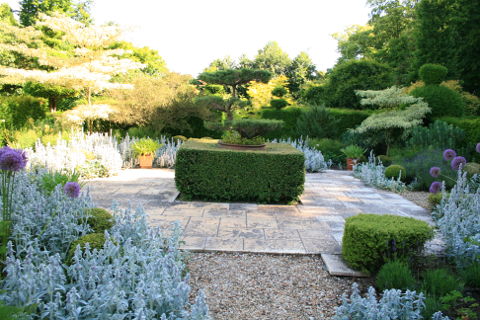 On entering the garden you are first struck by a magnificent verdent green. The first part of the garden is a series of formerly laid out gardens but the planting adds a pleasing informality to the gardens. Low hedging is used to make the formal patterns. The first garden is filled with masses of grasses, acers, euphorbias, geraniums and lots more.

The garden then descends into another garden and here the green is lightened with lots of silver and purple and a beautiful variagated tree in each corner. Clipped hedgeing and a patio area ensure a permanent structure and continuous interest. Alliums and other flowers provide seasonal interest.

Down again to another garden this time with a pond and hostas astilbes and a beautiful variagated grass which I plan to buy as soon as possible, Hakonechloa macra 'Aureola'. This is a variagated grass which you can see in the picture below. It forms beautiful golden clumps which are wonderful as a contrast to dark leaved box or to brighten a dark corner.

The garden continues with many more 'garden rooms'. There is a blue garden, a hemerocallis (day lillies) garden, an oriental garden and much more.

I think my favourite is the long 'English border' but this may just be because you don't see so many of these in France!

Throughout the garden the planting is incredibly well thought out with no empty spaces or sections lacking in interest. This garden really is an inspiration.

There is a good garden centre here too and so you can buy many of the plants that will have inspired you during your visit. There is also a small cafe with an outdoor terrace where you can buy drinks and cakes. 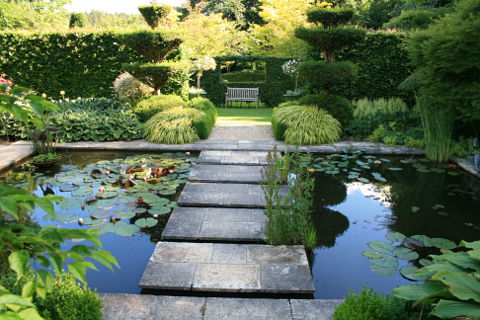 The garden is situated south of Bayeux, home to the famous Bayeux tapestries.

The Chateau de Vendeuvre is nearby and has excellent water features. Les Jardins du Pays d'Auge is a beautiful mix of gardens and ancient half-timber buildings.

Map of Les Jardins de Castillon and places to visit 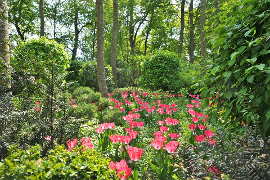 The Chateau de Vendeuve is a marvellous formal garden with lots of water features. 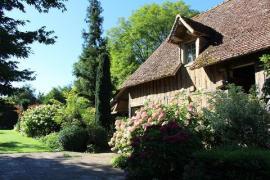 Les Jardins du Pays d'Auge are a number of themed gardens created around some charming traditional buildings. A treat! 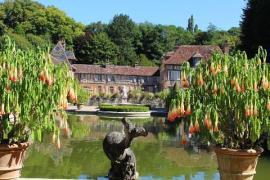 The gardens of the Chateau de Boutemont surround a very charming manor house style chateau and has a beautiful formal pond. 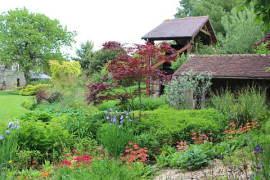 Les Jardins d'Etretat were inspired by the owner's friendship with Claude Monet. 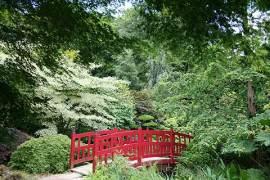 The Park Floral de Haut Bretagne is a large and beautiful garden with 21 different themed gardens.