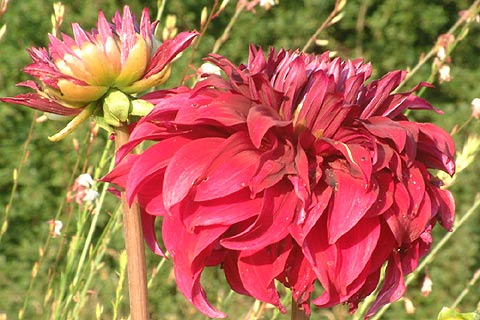 Dahlias are one of my favourite flowering plants. Partly because they are one of the few plants to flower continuously for months and partly because their jewel-bright colours are superb, both in the garden and as cut flowers in the house.

Here in the south west of France my dahlias flower from June until the first frosts which can be as late as November/December.

To ensure this continual flowering you do need to keep deadheading, I tend to do this once a week at the same time as I cut flowers to bring inside.

The range of dahlias is truly amazing as well. I am particularly keen on the deep purple colours which lend a depth to the back of borders if you grow one of the tall bushy varieties. Also the deep orange dahlias which add luminous colour.

I also like to grow a range of forms to add variety to flower arrangements as well as my garden. As with this star-shaped dahlia.

The Clos du Coudray garden in the north west of France has a large collection of Dahlias to see. 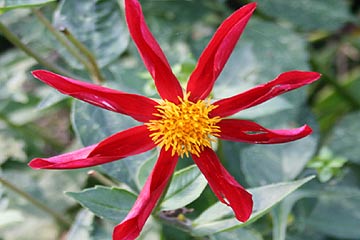 Dahlias should be planted in a sunny location.

The soil should be rich and well-drained with a pH of about 6.5, though they seem to thrive in my soil which is heavy clay with about one spade depth of good soil on top.

Do not plant until all danger of spring frost is past. I usually start my tubers in pots in a sheltered space in order to get a head start.

Tall plants will often need some support though I find that by planting in a mixed border often the surrounding plants will provide natural support.

Dahlias tend to have shallow roots so be careful when weeding or digging near the dahlia plants.

Dahlias need a lot of water and so, particulary if you have hot summers, it is important to mulch the plants at the beginning of summer. Mulch with compost , aged manure or straw.  Water plants when necessary but avoid wetting the foliage.

If you want to cut dahlia flowers early morning cutting will provide the longest lasting cut flowers. As soon as you cut the flower, plunge the stem into cold water.

Slugs are one of the main pests of dahlias with aphids and earwigs also occasionally causing problems.

The usual advice for over-wintering dahlias is to lift dahlias after the first frost though I now never do. After the dahlias have been hit by the first frosts I cut them back to the ground, apply a deep mulch of straw and wait for the spring. This has worked well for me despite my clay soil and winter temperatures which go down to at least -10°C every winter. I would try this with one of your dahlias to test whether this is an option for you.

Otherwise,  after the first frost lift the dahlias, cut the foliage off so that there remains a three to four inch stem on the roots, remove as much soil as possible without damaging the tubers, turn the dahlia tubers upside down to drain the stem and allow the soil to dry. When dry, remove the remainder of the soil.  Check the tubers and cut off any small roots and damaged tubers.  Dust any cut surfaces with sulfur. Place the tubers in cardboard boxes that have a few inches of sawdust, vermiculite or dry compost  in the bottom. Then cover them with the same packing material, leaving the stems exposed. A little moisture may be added to prevent shrivelling.

Keep the dahlia tubers in a cool, dry location and check from time to time.

When buying dahlia bulbs (tubers) it is important to chech that they are not shrivelled, damaged or diseased but are large fleshy and healthy looking.

In the spring cuttings can be taken from new growth but do not cut below the first set of leaves. Cuttings should be three to four inches long.

Dahlias are extremely versatile with a colour or shape to suit virtually every style of garden. They are of course cottage garden favourites and their bold colours lend them very well to a place in a tropical or exotic garden.